I had to make one old Samsung ML-2010P Laser Printer work on Xubuntu Linux . I've had some issues in installing it, I couldn't fine any step by step tutorial online, on how the printer can be made work fine on Linux. Therefore I took the time to experiment and see if I could make it work. Since the printer is old, not much people are interested any more in making the printer operational on Linux, hence I couldn't find too much relevant posts and sites on the net, anyways thanks God after a bit of pondering I finally succeeded to make the Samsung ML-2010P printer to print on Linux.This are the exact steps one has to follow to make this old bunch of hardware to play nice on Linux:

P.S. Some of the packages I list might already have been installed as a dependency to another package, as I'm writting this article few days after I've succeeded installing the printer, I don't remember the exact install order.

Here is a quote taken from Spix's project website:

"SpliX is a set of CUPS printer drivers for SPL (Samsung Printer Language) printers.
If you have a such printer, you need to download and use SpliX. Moreover you will find documentation about this proprietary language.
"

6. Go to Cups interface on localhost in browser and Add the Samsung printer.

Use Firefox, SeaMonkey or any browser of choice to configure CUPS:

Type in the browser: 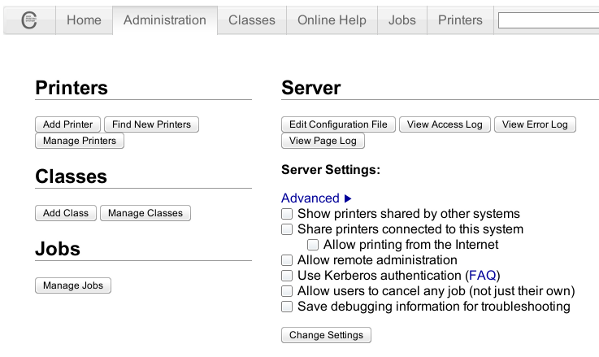 Click on the Add Printer button and choose to add the Samsung ML-2010.

Then restart the CUP Service (cupsd) to make it load the new settings:

Now give the printer a try in printing some page in SeaMonkey, Chrome or Firefox (the quickest way is through pressing CTRL + P )

Following this steps, I've managed to run the printer on Xubuntu Linux, though the same steps if followed should most probably make the Samsnung ML 2010 play nice with other Linux distributions with a little or no adjustments.
I'll be glad to hear if someone succeeded in making the printer work on other distributions, if so please drop me a comment.
That's all folks! Enjoy printing 😉

This entry was posted on Wednesday, January 18th, 2012 at 1:43 am and is filed under Linux, System Administration, Web and CMS. You can follow any responses to this entry through the RSS 2.0 feed. You can leave a response, or trackback from your own site.