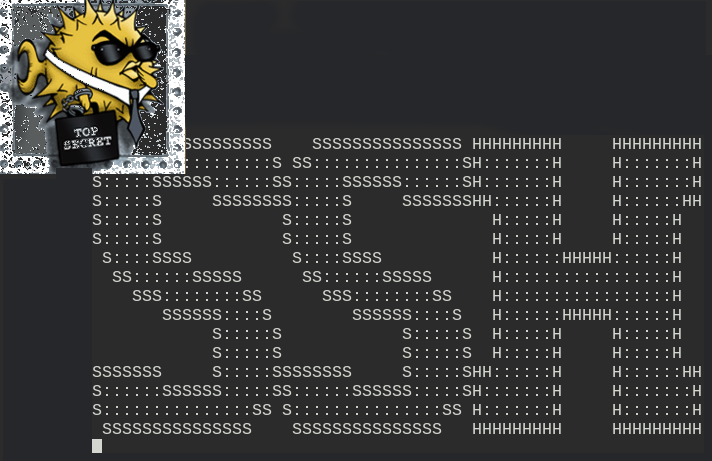 A scenario where you might need to execute remote commands as a user remote located Linux / BSD UNIX server is a common task for system admins nowadays.
Passwordless OpenSSH user server login to be able to run backup / log rotation scipts or a data anlysis is handy when used together with some tiny rsync / scp data copy scripts as a way to synchronize SMTP data between Mail servers / abstract databases (such as Redis) or PostgreSQL etc.

The overall picture is like this, we have 2 servers Unix / BSD / Linux OS Server 1 and Server 2 and both has up and running recent version of OpenSSH service.
Server 1 has to login without password to Server 2 and be able to run only a specific lets say privileged command for the sake of security only this restricted command should be runnable.

Allowing a server (LDAP or Local User account) to authorize without password to a remote server (and being able to execute) multiple set of commands poses a security risk, thus it is a good idea to Restict OpenSSH connection to remote server to be able to run only one single command.

This is luckily possible by by default in any modern OpenSSH (which allows authenticated remote users to be limited to rights for running just single sys admin scripts or a just a set of defined scripts only to remote system, this has been a very good alternative to using a complicated sudo /etc/sudoers rules files which anyways could almost always be compromised relatively easy.

Here is the task lets say a username 'sync' has to be able to run commands on your Linux server Server 1 (with a hostname – remote-server.com)  to execute a remote  script mysqlbackupper.sh that does a daily Linux MySQL backup via a predefined cronjob  scheduled task that is triggered daily.

1.  DSA or RSA SSH encryption pros and cons which one to choose?


Note this few interesting tihngs on which one to choose:

Due to fact encryption is faster in RSA and decryption faster in DSA, if performance on client side is targetted a better one to use will be RSA but if it is targetted to offload remote sshd server (lets say it is old hardware or busy machine where you don't want to put extra load on it then DSA is better choice. id_rsa and id_rsa.pub (public and private keys) are used to encrypt and decrypt the ssh (tunnel) session between the client and the server so most people would be curious which one is more secure RSA or DSA encryption.
Though there are some claims that in terms of security they're more or less the same RSA is generally preferred, because encryption can be up to 4096 bits, where DSA has to be exactly 1024 bits (in the opinion of ssh-keygen). 2048 bits is ssh-keygen's default length for RSA keys, and I don't see any particular reason to use shorter ones. (The minimum possible is 768 bits; whether that's "acceptable" is situational and not recommended).


The authorized_key added key string value is to be  generated earlier by ssh-keygen command with which we generate a key pair files:

What kind of files will be generated depends on the type of encryption strength choosen be it DSA or RSA etc. the full list of available ones you can read manual (man ssh-keygen)

Provide a filename and passphrase, the output files will be id_dsa / id_dsa.or id_rsa / id_rsa.pub pub key-pair and stored in ~/.ssh of username with which the command was run.

3. Set up /home/username/authorized_keys on Server 2

There is no special need to do anything too much special to make the SSH command restriction functionality available but just, the right record in /homeusername/.ssh/authorized_keys or if supposed to be run as root user in /home/postgreback/.ssh/authorized_keys on the server where you want to place the restriction following about a file syntax like OPTIONS-1 KEY_TYPE / OPTIONS-2 KEY_TYPE / OPTIONS-3 KEY_TYPE.

To authenticate with a key from a remote PC using the sshd service on Server 1  you need to have copied the key to /home/user/.ssh/authorized_keys (with a favourite text editor lets say vim from Server 1 to Server 2 so the file should contains the ssh public keys and users (list) allowed to passwordless login to server.

authorized_keys's data ordering (as mentioned above) is in form: 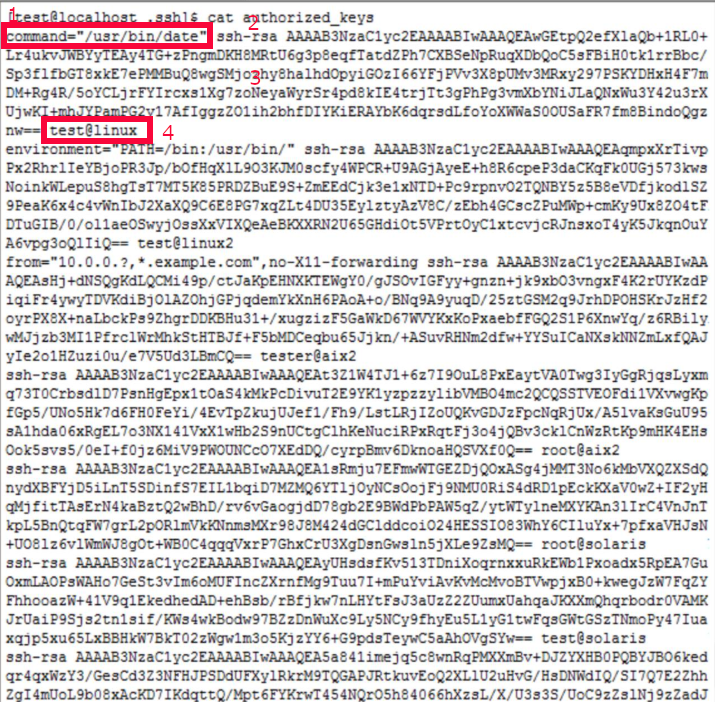 I've placed this example for more clarity the 4 fields of a public key string are marked with 1,2,3,4.


A shell script command to run on remote server where you want to run it and limit its execution only (below is taken from /home/postgresqlback/.ssh/authorized_keys:


the reason for them is as we want to restrict port forwarding and agent-forwarding (No X will be used at all) and we don't want to have SSH local / remote or Dynamic SSH tunneling enabled because of obvious (improve) security reasons.

In case if no interactive terminal will be used by the script as is the case it is also a good idea to put the no-pty next to the OPTIONS string.

From Server-1 (after lets say logging in via ssh to it) issue:

Here note that the FILENAME_with_private_auth_key (is your earlier generated id_rsa / id_dsa) as
this file will let anyone who have it at hands able to login to Linux-Server2 without any password
authentication prompt you have to make sure this file permissions are good restricted readable only
for its user owner or if run with root by root (chmod 600) might a be very good idea here.

For further executing the script via a simple user ssh to Linux-Server2 you might want to use in your trigger script or cronjob (situated on Linux Serve 1) also the -q (ssh quiet output) cmd argument:


Providing $SHELL command passed arguments to the script (on remote Server 2) is possible from Server 1 via given variable like $SHELLARG1,SHELLARG2,SHELLARG3 OPTIONs given below is example authorized_key file record


This will make the remote script understand SHELL variables might contain anything which the remote script postgresqlbackup.sh (on Server 2) will accept as pipeline input from Server 1.
Be aware that passing string arguments with has spaces or special characters inside might be problematic so always try to use a straightforward SHELL variables such as PATH, TEMP, PWD etc.


The $SSH_ORIGINAL_COMMAND variable used in authorized_keys is a very interesting one and it really puzzled me the first time I've seen it in a Bash Shell script as I couldn't fully grasp the meaning but it turned out to be very simple as it can be used inside /usr/sbin/postgresqlbackup.sh to return any number of passed arguments lets say backup locations directories ( /usr/local /var/log /usr/bin /bin …) to the and that would be red and processed by the script


The most basic /usr/bin/run-script.sh wrapper to place on Linux 2 would be something like:

!!! AGAIN BE CAUTIOUS AND BE WARNED  that without a properly  crafted script anyminor error in it might be fatal, for example if the script is running with superuser credentials (root) on remote machine, some local user or a malicious attacker that gets access to the server might decide to run something likea bove's rm -rf /* might destroy your server  !!!

As you can read above script (wrapper) example allows multiple restricted scripts to be run and would prevent you adding multiple command lines to authorized_keys and I've given this as example taken from StackExchange (Security if only allowing a few vetted commands).

Hope this is useful to some sys admin out there, if you find some other intereteresting use of the command ssh authorized_keys functionality or a script that tightents its use please share.

On each and every newly installed Linux or FreeBSD server. I’m always very cautious about three configuration directives for the ssh server.
This are X11Forwarding , Protocol and PermitRootLogin

One needs to be very watchful about this three ones, as tuning the right values surely prevents the server from many of the security issues that might rise up with the SSH server.

Many Linuxes like Debian and Ubuntu comes with X11Forwarding yes e.g. (X11Forwarding) enabled by default, this is an useless option in most of the cases as the servers I do administrate does not run a X environment.

Some older Linux distributions I have dealt with has the ssh Protocol 1 enabled by default and therefore, whether I do inherit an old server I have to start administrating the first thing I do is to check if the /etc/ssh/sshd_config‘s Protocol 1 option is enabled and if it is enabled I disable it.

PermitRootLogin is also an option which I often turn off as logging in via remote ssh is potentially dangerous as root password might get sniffed.

In overall the 3 sshd option’s I do check out in /etc/sshd/sshd_config on each newly installed Linux server are:

I always change this three options in my /etc/sshd/sshd_config
to:

X11Forwarding no
PermitRootLogin no
Protocol 2

One other options sshd server options which is good to be tuned is:

is generally a good idea.

Of course after the changes I do restart the ssh daemon in order for the new configuration to take place: