I’m still administrating some old archaic Joomla website built on top of Joomla 1.5. Recently there were some security issues with the website so I first tried using jupgrade (Upgrade Joomla 1.5 to Joomla 2.5) plugin to try to resolve the issues. As there were issues with the upgrade, because of used template was not available for Joomla 2.5, I decided to continue using Joomla 1.5 and applied the Joomla 1.5 Security Patch. I also had to disable a couple of unused joomla components and the contact form in order to prevent spammers of randomly spamming through the joomla … the Joomla Security Scanner was mostly useful in order to fix the Joomla security holes ..

So far so good this Joomla solved security but just recently I was asked to add a new article the Joomla News section – (the news section is configure to serve as a mini site blog as there are only few articles added every few months). For my surprise all of a sudden the new joomla article text started displaying text and pictures partially. The weirdly looking newly added news looked very much like some kind of template or css problem. I tried debugging the html code but unfortunately my knowledge in CSS is not so much, so as a next step I tried to temper some settings from Joomla Administrator in hope that this would resolve the text which was appearing from article used to be cut even though the text I’ve placed in artcle seemed correctly formatted. I finally pissed off trying to solve the news section layout problem so looked online too see if anyone else didn’t stick out to same error and I stumbled on Joomla’s forum explaining the Category Blog Layout Problem

The solution to the Joomla incomplete text showing in article is – To go to Joomla administrator menus:

1. Menus -> Main Menu -> (Click on Menu Item(s) – Edit Menu Item(s)) button
2. Click on News (section)
In Parameters section (on the botton right) of screen you will see #Leading set to some low number for example it will be something like 8 or 9. The whole issue in my case was that I was trying to add more than 8 articles and I had a Leading set to 8 and in order to add more articles and keep proper leading I had to raise it to more. To prevent recent leading errors, I’ve raised the Leading to 100 like shown in below screenshot 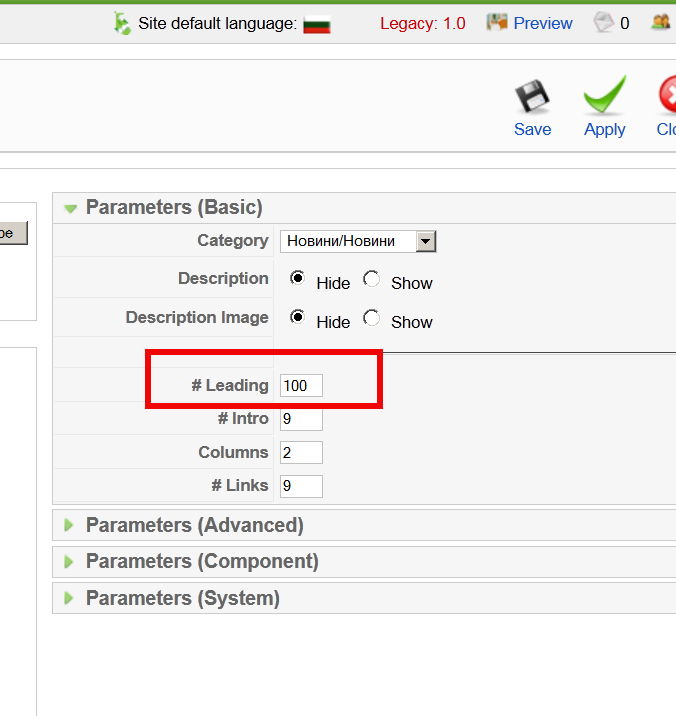 After raising to some high number click Apply and you’re done your problem is solved 🙂
For those curious what the above settings from screenshot mean:

N.B. Solving this issue took me quite a long time and it caused me a lot of attempts to resolve it. I tried creating the article from scratch, making copy from an old article etc. I even messed few of the news articles one time so badly that I had to recreate them from scratch, before doing any changes to obsolete joomlas always make database and file content backup otherwise you will end up like me in situation loosing 10 hours of your time ..

The bitter experiences once again with Joomla convinced me when I have time I have to migrate this Joomla CMS to WordPress. My so far experience with Joomla prooved to me just for one time the time and nerves spend to learn joomla and built a multi-lingual website with it as well as to administer it with joomla obscure and hard to cryptic interfaces and multiple security issues., makes this CMS completely unworthy to study or use, its hardness to upgrade from release to release, besides its much slow and its less plugins if compared to WordPress makes wordpress much better (and easier to build use platform than Joomla).
So if you happen to be in doubt where to use Joomla or a WordPress to build a new company / community website or a blog my humbe advise is – choose WordPress! 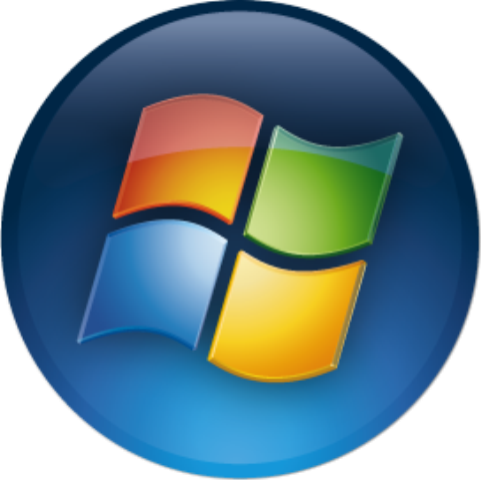 Linux's default file that defines what DNS servers will be used /etc/resolv.conf typically contains directives with the default search domain or domains; used for FQDN (Fully Qualified Domain Name) completion when no domain suffix is supplied as part of the  DNS query. Lets say sub-domains under domain.com  has to be accessed (in /etc/resolv.conf) there is:


Here is /etc/resolv.conf from www.pc-freak.net


The DNS server knows that all failed to resolve queries by set DNS should be searched (resolved) under the defined search domain, i.e. each DNS query for server2, serverX (would try to be resolved as a subdomain of domain.com).

Therefore, a very good question is what is Microsoft Windows (2000, 2003, 8) OS equivalent way to define search domain.com into /etc/resolv.conf?

In Windows the same /etc/resolv.conf hosts search is done using the so called "DNS Suffixes".

DNS Suffixes are used for resolv of (domain name strings with no dots).

Adding a new DNS Suffix in Windows is done from 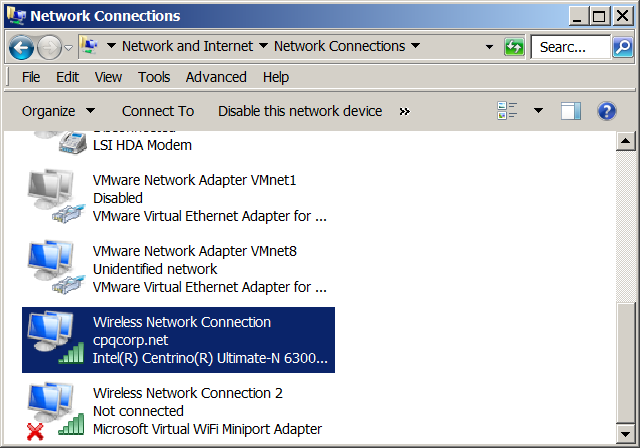 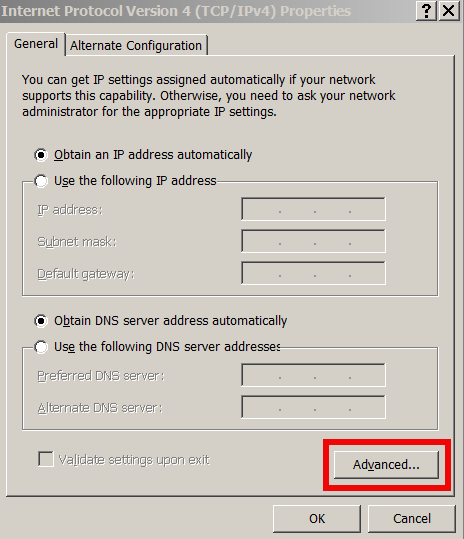 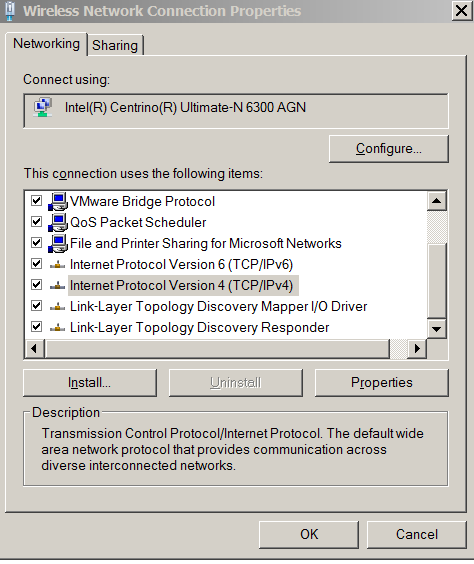 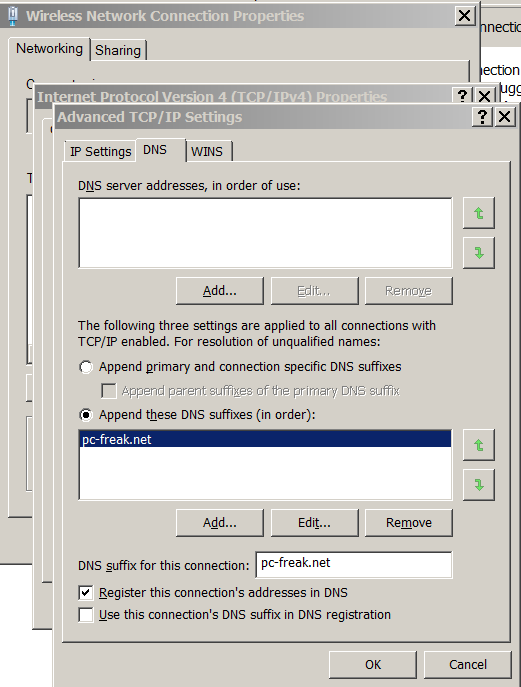 DNS Suffix for this connection


(exactly like adding search www.pc-freak.net in  /etc/resolv.conf on Linux host). Add multiple hosts DNS Suffix, if you want to access subdomains naming from multiple base domain.

In an attempt to use Paros Proxy and WebScarab on Debian I faced a shitty issues with Java’s Networking.

Neither of the forementioned Security Applications’s Local Proxy to be spawned by the Java server won’t work.

I assured my self there is nothing running on the ports 8080 on which the two Java applications attempted to run their local proxy server.
Being sure that nothing is listening on the 8080 port. I suspected that there is something wrong with Debian’s Java networking.
A quick search in Google pointed me to the Debian.Net’s forums where the issue was described as serious proxy error after updates .

The error that was returned by the ParosProxy Server on my Desktop Debian can be reviewed below:

All a man can grasp from the Error is that there is something wrong with running the Paros Proxy server.
So far so good since the last release of Paros Proxy originates back to the year 2006 and it’s not really supported this days at first I thought this could be causing the error.
By the way the paros proxy is available via the debian packaging system. So I use the packaged version of paros to install the Debian packaged version of Paros Proxy issue the cmd:

I followed the start up instructions on WebScarab’s Website in order to run the application.
It was really simple. All I had to do is download the webscarab-current.zip which of the time of writting this post is webscarab-20100414-0036 and then launch the Java Debian Virtual machine.

However though my hopes that WebScarab’s local Proxy server will be running fine I was unpleasently suprised by the error which shown below:

However I was lucky to find the solution in some 20 minutes, so hopefully it took you less to find this post.

The solution to the above Proxy Spawn Error with Paros and Webscarab on Debian Lenny’s Java 6 Sun Server is really simple and it comes to this:

1. edit /etc/sysctl.d/bindv6only.conf and change the value

Now launch once again either Paros Proxy or Webscarab, the Local Proxy Server by each of them will bind to either port 8008 (WebScarab) or port 8008 (Paros Proxy).

Today I got the intention to install some software that would report Statistics for Qmail in a Web Interface.
In other words I wanted to have Web qmail statistics that would report information about the sent and received emails per domain name from the Vpopmail.
Some time ago I used a project called qmailalizer . I modified it a bit back then because all itâ€™s interface was in German and the install was a hell so I added up a little install.sh script that simplifies the installation project with qmailalizer.
Therefore I decided to install and test the software on debian 2.6.26-2-amd64 (64 bit) platform. The build failed ofcourse and thereforeI needed to install some packages which included the required header files by the qmailalizer source code. This are:

Hopefully afterwards your build wonâ€™t fail, but whenever you install the software youâ€™re about to face another unsavoury,error caused by the old PHP code which was dedicated to run on top of PHP4 and this days most of us uses PHP5 on our Debians.So whenever I tried to access qmailalizer I received the ugly php error:

In order to fix that error I used a code from a nice article by Alexandre Alapetite titled XSL transition from PHP4 xslt to PHP5 xsl . All that is necessery to be done to weed out the erroris:

And then download xslt-php4-to-php5.php and save the file with a php extension.
Thatâ€™s it now your â€œCall to undefined function xslt_create()â€ shouldnâ€™t bug you any more.

I tried using debugging what exactly procudes the segmnentation fault with Qmaializer using strace .All I can found out was that it has something to do with /etc/localtime.
A bit of googling revealed that Debian has some issue with the rrdtool binary package compiled for 64 bit architectures that dates back from the year 2007.
The exact thread concerning rrdtool and a 64 bit architecture can be red here .
This bug report advices that rrdtool is recompiled with a change in CFLAGS in debian/rules from the debian rrdtool source package whether the change should be like follows:

I experimented changing the CFLAGS compile time options in the source of qmaializer but that didnâ€™t do any good.

Iâ€™ve decided to drop qmailalizer for the moment and use itâ€™s substitute called isoqlog .The main motive to choose drop out with qmaializer though I really like this piece of archaic soft, is that it no longer supported since the â€™2004.
Luckily isoqlog is a supported piece of software and is capable of producing most of the reports produced by qmailalizer if not all of them.
So in case if youâ€™re looking for good alternatives to QmailAlizer you should definitely check isoqlog.
Some other possibilities to Calculate and Report from your qmail logfiles is awstast, Iâ€™ve found the following article called Calculate Statistics From your Qmail logfiles an interesting reading and a good learning point.
Hope itâ€™s gonna be helpful for you too. Maybe Iâ€™m gonna try a bit more to fix up the broken isoqlog but it depends if Iâ€™ll have enough time.
If I eventually succeed and fix it. Iâ€™ll share the working copy of qmailalizer with the world.

It’s really easy to solve, all you need to do is open gmplayer.
Go to gmplayer’s Prefences -> Audio there you should tick the
Enable Software Mixer. That’s it you shouldn’t experience the problemany longer 🙂