How to search text strings only in hidden files dot (.) files within a directory on Linux and FreeBSD

If there is necessity to look for a string in all hidden files with all sub-level subdirectories (be aware this will be time consuming and CPU stressing) use:

Sometimes its necessery to only grep for variables within the first-level directories (lets say you would like to grep a 'PATH' variable set, string within the $HOME directory, the command is:

The regular expression .[!.]*, means exclude any file or directory name starting with '..', e.g. match only .* files

Hence on BSD, if you need to look up for a string within the home directory, hidden files: .profile .bashrc .bash_profile .cshrc run it under bash shell:

Another easier to remember, alternative grep cmd is:

I'm running WordPress for already 3 years or so now. Since some very long time. The first wordpress install, I can hardly remember but it something like wordpress 2.5 or wordpress 2.4

Since quite a long time my wordpress blog is powered by a number of plugins, which I regularly update, whenever new plugins pops up …
I haven't noticed most of the time problems during major WordPress platform updates or the update of the installed extensions. However, today while I tried to reply back to one of my blog comments, I've been shocked that, I couldn't.
Pointing at the the Comment Reply box and typing inside was impossible and a null message was stayed filled in the form: 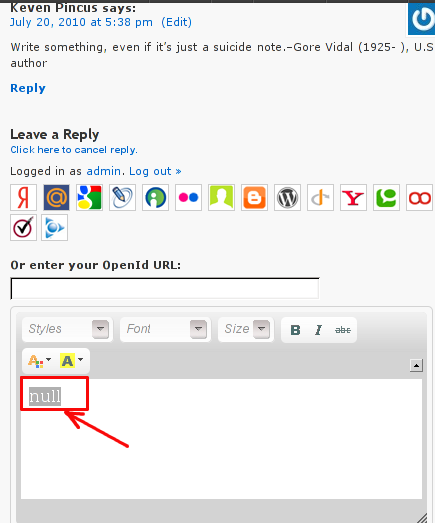 To catch what was causing this weird misbehaving with the reply comments functionality, I grepped through my /var/www/blog/wp-content/plugins/* for the movecfm(null,0,1,null):


I've taken the string movecfm(null,0,1,null) from the browser page source in in my Firefox by pressing – Ctrl+U).

Once I knew of the problem, I first tried commenting the occurances of the null fields in wp-thread-comment.php, but as there, were other troubles in commenting this and I was lazy to read the whole code, checked online if some other fellows experienced the same shitty null void javascript error and already someone pointed at a solution. In the few minutes search I was unable to find anyone who reported for this bug, but what I found is some user threads on wordpress.org mentioning since WordPress 2.7+ the wordpress-threaded-comments is obsolete and the functionality provided by the plugin is already provided by default in newer WPinstalls.

Hence in order to enable the threaded comments WordPress (embedded) reply functionality from within the wp-admin panel used: 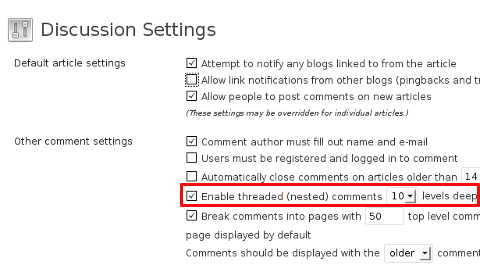 You see there is also an option to define how many nested comments subcomments, can be placed per comment, the default was 5, but I thought 5 is a bit low so increased it to 10 comments reply possible per comment.

Finally, to prevent the default threaded comments to interfere with the WordPress Threaded Comments plugin, disabled the plugin through menus:

This solved the weird javascript null "bug" caused by wordpress-threaded-comments once and for all.
Hopefully onwards, my blog readers will not have issues with threaded Reply Comments. 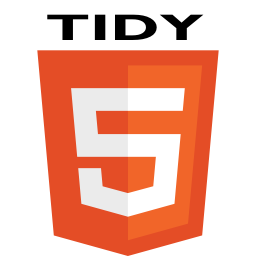 I've noticed in /var/log/apache2/error.log on one of the Debian servers I manage a lot of warnings and errors produced by tidy – HTML syntax checker and reformatter program.

I did a quick investigation on where from this messages are logged in error.log, and discovered few .php scripts in one of the websites containing the tidy string.
I used Linux find + grep cmds find in all php files the "tidy "string, like so:

Opening the files, with vim to check about how tidy is invoked, revealed tidy calls like:

As you see the PHP programmers who wrote this website, made a bigtidy mess. Instead of using php5's tidy module, they hard coded tidy external command to be invoked via php's exec(); external tidy command invocation.
This is extremely bad practice, since it spawns the command via a pseudo limited apache shell.
I've notified about the issue, but I don't know when, the external tidy calls will be rewritten.

Until the external tidy invocations are rewritten to use the php tidy module, I decided to at least remove the tidy warnings and errors output.

To remove the warning and error messages I've changed:

Onwards tidy no longer logs junk messages in error.log Not logging all this useless warnings and errors has positive effect on overall server performance especially, when the scripts, running /usr/bin/tidy are called as frequently as 1000 times per sec. or more

After a recent new Debian Squeeze Apache+PHP server install and moving a website from another server host running on CentOS 5.7 Linux server, some of the PHP scripts running via crontab started displaying the following annoying PHP Warnings :

I was too lazy to edit all the above found declarations trying to include the suhosin module in PHP, hence I remembered that probably all this obsolete suhosin module declaration are still present because probably the php5-suhosin package is still not purged from the system.

A quick check with dpkg , further strenthened my assumption as the php5-suhosin module was still hanging around as an (rc – remove candidate);

Hence to remove the obsolete package config and directories completely out of the system and hence solve the PHP Warning I used dpkg –purge, like so:

Further on to make sure the PHP Warning is solved I did the cron php script another go and it produced no longer errors:

Error from park wrapper: mydomain.com is already configured. Sorry, that domain is already setup (remove it from httpd.conf) – How to solve

If you’re administrating a Cpanel server and you come across an error message while trying to use cpanel’s domain addon menu and you want to fix that you will need to do the following logged in as root over an ssh connection:

2. Edit the current used httpd.conf on the server and remove all virtualhost domain definitions

3. Remove any domain occurance in /var/cpanel/users

4. Edit /etc/named.conf and remove any definitions of mydomain.com

7. Remove any occurance of mydomain.com in the user directory which experiences the Error from park wrapper: error

Let’s say the user testuser is experiencing the error, in that case you will have to remove:

Now try to add up the domain via the Cpanel domain addon interface, hopefully the issue should be fixed by now. If not you might also check if there is no some record about mydomain.com in the mysql server.
Cheers 😉

To change the Main Menu link menu entry in Joomla, from Joomla administ rator I tried to:

I’ve changed the title but the change didn’t appeared in my Joomla based website .

I tried to change it directly in the source code of the website by looking for ‘Main Menu’ string with:

but it appeared too complicated and after trying few string changes in few files I decided to drop this kind of approach.

A bit of investigation online led me to how to achieve what I was trying to dire ctly from Joomla.

Here is how. In Joomla administrator move to:

The new text you entered will appear on the joomla website immediately, enjoy.